Why you have to have the Non-Slip Yoga Towel:

Get to know the Yoga Towel in detail:

The practical yoga towel made of environmentally friendly, 100% PVC-free fabric is an extremely absorbent pad for every yoga mat. With its dense, velor-like fabric (microfiber) and its enormous grip on both sides, it offers a lot more slip resistance than a normal beach towel, especially with sweat-inducing and dynamic yoga styles.

You can take the yoga towel with you everywhere - whether in the yoga studio, yoga events such as conferences, festivals etc. or on the go when traveling, where it can even serve as a mat replacement. Of course, the hygienic towel is machine washable and tumble dry.

If you practice on "foreign" mats outside of your home that are used frequently, the Yogatowel pays off. But it also ensures additional hygiene on your own yoga mat, because it reliably absorbs sweat and can then be easily washed.

Perhaps you have taken ordinary towels to the yoga studio as a mat cover because you did not always want to transport your yoga mat, or maybe you also put towels to absorb moisture on the yoga mat at home - but then to be annoyed by the frequent slipping of the towel. With the non-slip yoga towel this is a thing of the past! The yoga towel not only offers you a non-slip surface, but also lies reliably on the mat and stays where it is. No waves, no distraction in the flow.

And if there is no yoga mat far and wide, the yoga towel can also be used as a sole pad. Fortunately, unlike mats, it fits easily in any sports or larger handbag.

Bikram yogis particularly value the yoga towel, but it is now also very common in all other yoga styles due to its many advantages. Once you have it, you won't give back the non-slip yoga towel.

Another advantage of the yoga towel is its multifunctional usability: it can also be used as a pad or as a scarf for meditation, for example, and as a blanket for Shavasana. The pleasant microfiber feels good on the skin.

All of this makes the non-slip yoga towel a must-have that should not be missing in yoga equipment and always does a good job. If the yoga towel did not already exist, you would definitely have to invent it quickly!

FAQs: The most common questions about your new Yoga Towel

Is the non-slip yoga towel washable? Yes, the yoga towel can be washed in the washing machine and then dried in the dryer.

Other customers have also bought the following items 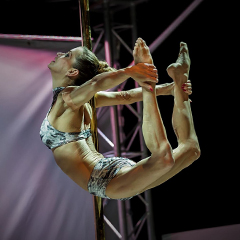 In my active time it was always important to me to have reliable partners at my side. With my own studio "YH Studio Pole (and) Sports Berlin Yvonne Haug" I have experienced how important it is to receive good advice and quality. I was never disappointed by PoleSportShop, I always got the best possible advice and can really recommend them.